One would think with the power of Hollywood, that the United States would have produced Olympic films in 1932, when the Winter Games were held in Lake Placid and the Summer Games in Los Angeles. But they didn’t. This oversight was repeated in 1960, even though the chairman of the Pageantry Committee in charge of the Opening and Closing Ceremonies was none other than Walt Disney. So, the official film of the Squaw Valley Olympics, People, Hopes, Medals, is in German and was directed by an Austrian, sports journalist Heribert Meisel. An English-language version was released with the title Flame in the Snow.

These were the first Olympics to include biathlon competitions and the first in which women competed in speed skating. But we don’t see any of these events. The overwhelming emphasis is on Alpine skiing and figure skating. The six Alpine events are covered in detail, with descriptions of the courses, sidebars about ski waxing, close-ups of the winners and other favorites and montage sequences of crashes in the women’s downhill and the men’s slalom. Considering that many of the skiers compete without helmets, this is a bit disturbing.

The film includes the gold-medal performances in each of the three figure skating disciples. In a nice touch, coverage of the pairs event focuses on the mothers of the skaters as they watch from the stands.

Coverage of cross-country skiing is limited to the 50-kilometer race, which is unfortunate because the most dramatic event was the 4×10-kilometer relay, the only race in which competitors raced against each other rather than against the clock. Edging ahead in the final strides, Finland’s 35-year-old Veikko Hakulinen crosses the finish line one meter ahead of Håkon Brusveen of Norway.

The Nordic combined event merits more than the usual coverage because it was won unexpectedly by a German, Georg Thoma, breaking a streak of seven victories by Scandinavians going back to the beginning of the Winter Olympics.

We are also shown the tense, come-from-behind victory of the US ice hockey team over the team from the Soviet Union. Not shown in the film is that the Americans still had to win their final match against Finland the following morning, which they did by again coming from behind.

This being a German film, we are treated to some amusing national stereotypes. Americans are described as “stubborn” but with “boundless enthusiasm,” as the US organizers overcome the challenges of a heavy snowstorm before the Opening Ceremony. We are also told that when it comes to fashion, “Taste is a matter of opinion, especially in America.”

During coverage of the Parade of Nations, we are told, bizarrely, that “Swedes like lemons.”

Although it is not included in the Criterion/IOC set, there is another film, 24 minutes long, about the Squaw Valley Olympics, produced by the United States Forest Service. Winter Olympics on the Tahoe National Forest is narrated by Lowell Thomas. The first half deals with preparation of the sites, including avalanche control, while the second half gives an overview of the various sports. If it seems odd that the US government would produce a film about the Olympics, it is worth noting that facilities at Squaw Valley were so limited that the federal government stepped in and provided 25% of the funding for the Games, $20 million, the equivalent of more than $185 million in 2021. 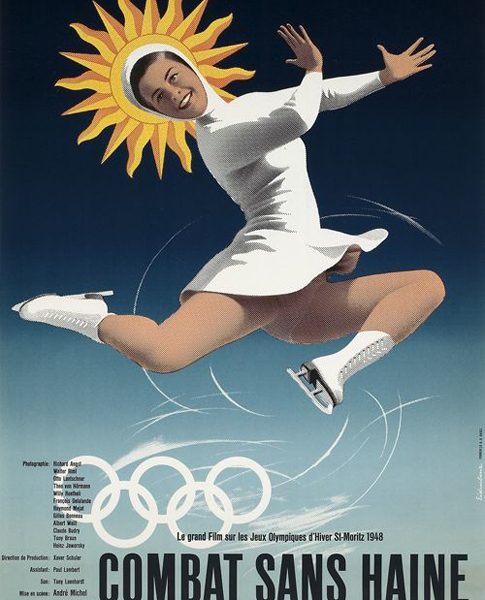