Four different official films were produced for the 1988 Seoul Olympics, three of which are included in the Criterion/IOC set.

Seoul 1988, directed by Lee Kwang-soo, is a straightforward documentary that tries to cover at least one winner in as many sports as possible. There are no interviews, but the narrator adds many upbeat comments about the Olympic Movement. The film begins with images of athletes of different nations and races dancing at the Opening Ceremony before shifting to the beginning of the Ceremony, which begins outside the stadium on the Han River. When the Olympic flame is brought into the stadium by an elderly man, he is identified as Sohn Kee-chung, winner of the 1936 marathon. Not mentioned is Sohn’s story, which was well-known to Koreans. In 1936, Korea was occupied by Japan. Sohn and his Korean teammate, Nam Sung-yong, who earned the bronze medal, were forced to use Japanese names. At the medal ceremony, they bowed their heads during the playing of the Japanese national anthem. Fifty-two years later, Sohn, now 76 years old, carries the Torch into the stadium, jumping up and down as he does so. One nice ceremonial touch is the appearance of the Olympic mascots from previous Olympics, including the boycotted Moscow and Los Angeles Games.

The first competition shown is the men’s 100 meters, which begins with a shot of bare-chested Ben Johnson of Canada smiling at the camera. The narrator then says that “The Olympics are based on rules and integrity.” We watch Johnson cross the finish line in first place, but then learn that he has been disqualified and we see him at the airport, leaving the country with his “reputation tarnished.”

During the segment on American sprinter Florence Griffith-Joyner, who won three gold medals, we are told that she spent four minutes running and fifteen minutes on her make-up. As a point of information, she actually spent about three minutes 21 seconds running. Her exact make-up time is not recorded.

Several more athletics events are covered, as are several swimming finals. For the men’s 400-meter individual medley, the narrator reminds us that the winner, Tamás Darnyi of Hungary, is blind in one eye, and that the silver medal winner, Dave Wharton of the United States, is deaf. East German swimmer Kristin Otto is hailed for winning six gold medals. Six years later, it was revealed that Otto’s use of prohibited substances had caused her to have a testosterone to epitestosterone ratio of 17:1. At the time, the acceptable ratio for men was 4:1.

Naturally, South Korean victories are highlighted. When the South Korean women win the handball final, we are informed that this is South Korea’s first victory in a “ball sport.”

During an interlude showing athletes from different nations interacting in the Olympic Village, the narrator notes that “One god is all anyone needs in life, but with friends, the more the better.”

For the first time, wheelchair racing is shown in an Olympic film. (It was first included as a demonstration event in 1984.) During the men’s race, Robert Figl of West Germany crashes. Yoo Hee-sang of South Korea, racing with his head down, smashes into him and also falls. They rise, hold each other by the shoulder and continue.

We are given statistics relating to the Games. There are two of particular interest. Athletes from Asia, Africa and South America earn only 13% of the gold medals, even though they account for 83% of the world’s population. And none of the 237 medal events started more than five minutes late.

The film engages in a couple instances of historical whitewashing. For example, the narrator twice refers to the 1988 Seoul Olympics as boycott-free. Actually, four countries did boycott: North Korea, Cuba, Ethiopia and Nicaragua.

Before returning to images of the Closing Ceremony, the film concludes with montages of medal ceremonies and athletes at the moment of victory, with some injured athletes thrown in. 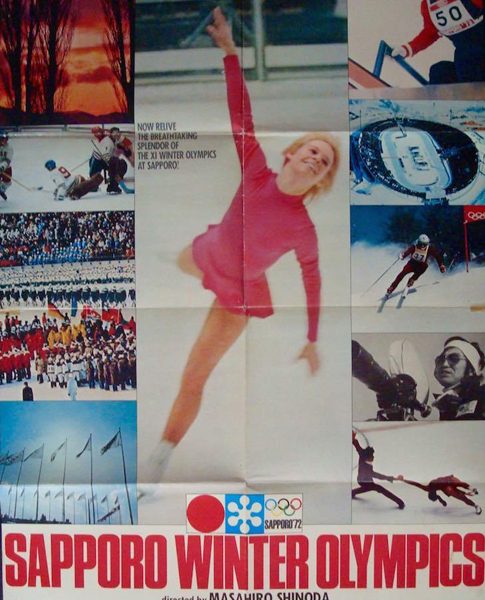